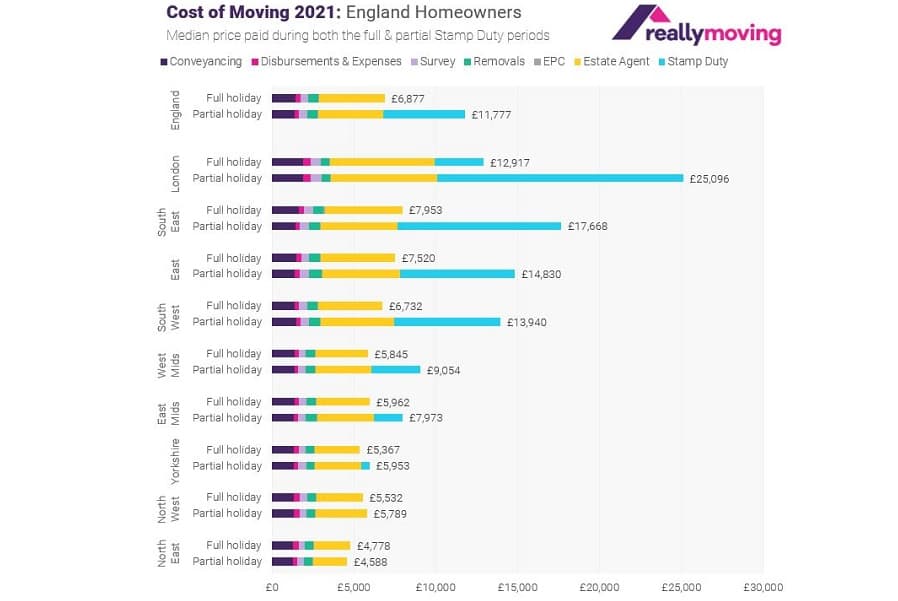 The cost of moving home has risen significantly post 30th June due to the tapering and final end of the SDLT holiday in June and September to a record high of high of £11,777; up from £6,877 prior to 30th June.

But professional fees have dipped slightly, potentially pointing to a return to more “normal” competition in the market.

Comparison site reallymoving.com analysed 320,000 quotes over the last year and as revealed that estate agent fees have fallen by 1% since 20th June, while conveyancing fees have dropped 4% to an average of £1650. The research also shows that estate agents continue to achieve nearly one and half times the fees that conveyancers achieve.

The overall cost of moving has hit record highs in part due to rising house prices, which impact associated costs, as well as higher demand for services like removals which have risen 2.6%, and surveys (+1.4%).

Unsurprisingly, home movers in higher value areas are hit the hardest, with London seeing the cost of moving almost double (+94%) from £12,917 to £25,096 since the end of June, while First Time Buyers in the capital have been even harder hit and now need to find £7,195 compared to £2,435 during the stamp duty holiday – an increase of 195%.

By comparison, less expensive regions in the north still escape paying stamp duty or pay a minimal amount based on the median purchase price, resulting in only moderate increases in the cost of moving, while existing homeowners in the North East have actually seen the cost of moving fall from £4,778 to £4,500 due to a dip in estate agency and conveyancing fees.

“The cost of moving home is at a record high and movers have had to absorb a huge hike in up-front costs since the main stamp duty holiday ended on 30th June. These rises have been felt most in London, with movers in the capital having to find over £25,000 – and over £7,000 for First Time Buyers, which is a significant challenge on top of raising a deposit.

“We saw an increase in conveyancing and removals costs in England during the stamp duty holiday due to exceptional levels of demand, but conveyancing costs have dropped slightly since the end of June as pressure on the system has eased.

“First Time Buyers will be relieved to be once again the only group to benefit from stamp duty exemptions on lower cost homes, reducing competition from other buyers. The cost of moving for First Time Buyers in England is high, at over £2,000, but the good news is that expenses have remained relatively stable, making it easier to plan a move.

“The property market remains buoyant with strong competition for homes, so it’s more important than ever to compare ratings and customer reviews when searching for home move services, as well as price, to ensure that when you do decide to buy, your transaction progresses as smoothly as possible.”

Throughout the last 18 months conveyancers have increased their fees leading many industry commentators to urge them not to revert after the SDLT to previous fee scales. Writing for this publication in June Rob Hailstone, CEO of Bold Legal Group said

“(I) urge firms and practitioners to hold their nerve when transaction levels adjust. If they don’t, there will be another race to the bottom. Benefitting no one, including estate agents.”

“The problem isn’t just having more work than we can cope with, the problem is also that transactions are more complex, need more hand-holding, and are generally more difficult in such a stressful market.”

“My suggestion, to keep your staff and keep them happy, is to be brave and double your prices.”