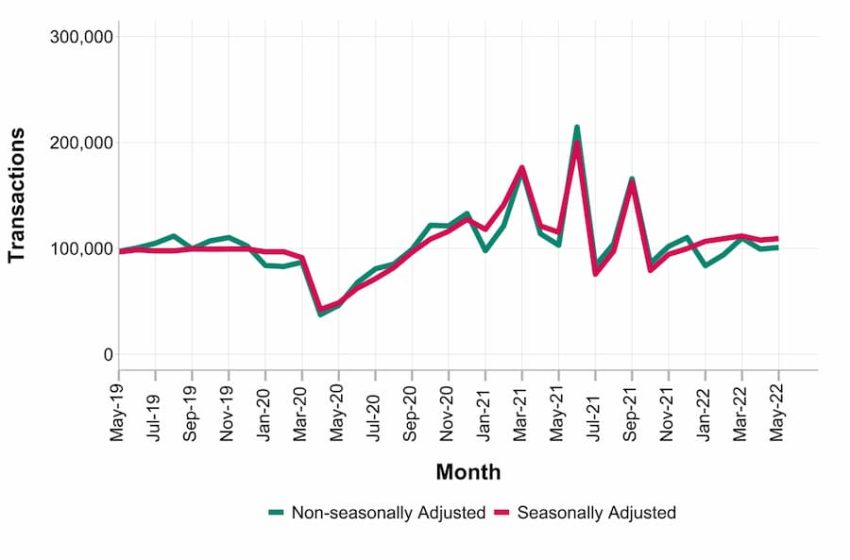 Monthly transaction figures published by HM Revenue & Customs (HMRC) on Tuesday revealed that the number of UK residential property transactions in May was 2.0% lower than May 2021, though had risen 1.6% from April 2022.

Despite this, May 2022’s figure remains slightly above pre-pandemic levels, with May 2019 seeing 97,040 residential property transactions. HMRC described the figures as “[stable] but somewhat elevated compared to before the coronavirus pandemic”. Transactions are also 11% above their long-run average of 98,048.

The housing transactions reported in May will have been started several months earlier, but the fact that so many were completed is positive news for the housing market, demonstrating that it is built on strong foundations.”

“Although the outlook is one of harder times to come we have to be encouraged, in the short-term, that monthly completed transactions are higher now than they were at the same point in 2019. It appears that despite, or because of, the threat of rising interest rates there was plenty of impetus for people to buy or move in the first quarter of this year.

Whether that same impetus will remain now that we have seen the first rate rises is debatable. However, it has to be said for those of us that remember the eye-watering rate of 17% in 1979, current rates are still very low. It all now depends on how many more increases the Bank of England feels will be necessary to bring inflation under control, and how that will translate for mortgage borrower rates later this year.”

“There are some signs that the recent economic pressure is starting to feed through to the housing market. On a seasonally adjusted basis for May, UK residential transactions are 5.1% lower year-on-year. Of course last year is a tricky yardstick to measure by, given the SDLT deadline, which was moved. Despite an improved supply of properties coming onto the market, the higher cost of living, base rate rises and less competitive mortgage products, all mean that choices are becoming more limited, particularly for first-time buyers. We will see over the coming months how the market copes with the cost-of-living crisis and whether transactions slow, or whether the market can ride out these challenging times.”

“There’s still plenty of life left in the property market, but it’s nowhere near as lively as it was at the peak, and it’s not going to perk up much from here.

May saw slightly more sales than April, but slightly fewer than a year earlier. This is a world away from the peaks we saw in June last year, when roughly twice as many homes were sold. Over time, we can gradually expect sales to fall back, because we’re increasingly seeing buyers think twice about getting into the market, and last week’s rate rise isn’t going to help.

The latest RICS residential survey saw new buyer enquiries fall slightly in May, and the agents reported that even those who were house-hunting were incredibly cautious. A toxic combination of runaway inflation, sky-high house prices and another bump in interest rates is starting to take its toll, and some buyers are rethinking whether they can really afford to stretch themselves at the moment. Even if their sums still add up, they’re starting to worry that they could end up over-exposed if everyone else starts pulling back and price rises drop off.

We expect sales to tail off as we go through the year, but as May’s figures show, it’s not going to be a steady downwards path just yet. There are still plenty of buyers who have been searching for a property for months, so as sellers slowly shuffle onto the market, these long-term hunters will finally find the property they want. It means this particular period of higher sales may well have a reasonably long tail.”

“We shouldn’t be surprised to see transactions down year on year, as spring and summer 2021 saw buyers rushing to complete before the stamp duty holiday began to wind down. The market is still very active, with transactions above pre-pandemic levels, but we are seeing a more stable pattern this year reflecting usual seasonal ebbs and flows and more in line with pre-pandemic volumes. May’s transaction numbers are predictably rising, with the typical Spring market peak intensified further by pent-up demand and a sustained rush on mortgage deals as interest rates continue to climb. Our own research shows that conveyancing firms experienced the busiest financial year on record in 2021/22, processing 60% more transactions than 12 months earlier, and it’s clear there’s no respite on the horizon just yet.

Our data also showed that growing case volumes have had a major impact on conveyancing firms’ productivity – on average, they’re now tasked with completing transactions at a rate of 1.22 each working day, more than double the rate of 0.53 per day we saw a decade ago. While bottlenecks mean transactions are taking an average of 50 days longer to complete than in 2019*, conveyancers are nonetheless working at breakneck speed within a system that is still far from being fit-for-purpose.

The only meaningful way to keep pace with sustained demand is to adopt a digital-first response to how the UK transacts on property purchases. Our archaic system needs a reboot to meet today’s expectations, both in terms of speed and accuracy. The pandemic has proved that the latest technology is not a nice-to-have, but an essential part of a fully functioning property market with robust legal processes underpinning it.

Although we expect transaction volumes to cool slightly for summer, autumn is traditionally a very busy time for the housing market even with the likely shadow of stagflation. The volume of transactions this autumn will be influenced by stretched affordability issues and whether many forced sales may come about as a result. HM Land Registry is also prompting solicitors and conveyancers to go digital this autumn when submitting AP1 applications, and it’s vital firms tackle the transition ahead of time so that conveyancing processes can progress smoothly through these uncertain times.”