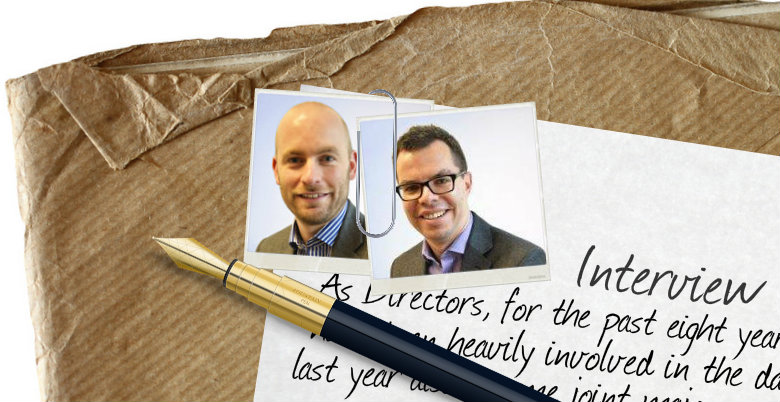 As Directors, for the past eight years, Tom Parkinson (TP) and Andrew Graves (AG) have been heavily involved in the day to day running of Rowlinsons Solicitors and last year also became joint majority shareholders. Jane Common recently caught up with them during their annual January strategy meeting to discuss their plans for the year ahead.

So have you had a busy start to the year?

TP: “Obviously January is the quieter time in terms of new instructions so we take the opportunity to do all of our planning for the year ahead. In January each year, for about the 12 years or so that I have worked in conveyancing, I slightly worry about the instructions levels and then, come February and March, wonder what I was worrying about in the first place! So now we take the opportunity of the quieter time in January to get organised and ahead.”

TP: “That’s right. Andrew and I have been with Rowlinsons for the best part of ten years and eight years ago we were made directors – it’s been a phased process. Then, twelve months ago, we acquired Denis Stevenson’s (formerly the firm’s Managing Director) shares and he reduced his hours to three days a week, working in business development. So Andrew and I are at the helm now and we’re really enjoying it.”

AG: “Seven or eight years ago we sat down with Denis, put a business plan in place and delivered on it. My background is in business – I did a business degree at university and then worked for a blue chip company on a graduate scheme for five years before having a career change and studying law. So my commercial background works well in terms of the value I add to the company as I can look at things from a business perspective.”

Obviously, Denis Stevenson has been involved with  Rowlinsons for a long time – what do you most value about the ethos he built up in the firm?

AG: “We pride ourselves on being approachable – that’s a given at Rowlinsons. The perception of a lot of law firms is that they are stuffy – clients can only see a lawyer by appointment, for example. But we’re happy for people to drop into the office and we give all our clients our direct dials.  We stay open late on Tuesdays and Thursdays and we open on Saturday mornings too – most of our clients obviously work nine to five so we need to fit around their schedules.“

TP: “Yes, we’re excellent in terms of client care and customer service – that was the ethos that Lynne and Geoff Rowlinson, who set up the firm over thirty years ago, installed and which Denis continued. All our business relationships are important to us. Estate agents, for example – some conveyancers view them as an interference and against you but that is not correct.  They are on the same side as us and it’s in all our interests to push the cases through professionally and promptly.”

What do you both appreciate most about your roles at Rowlinsons?

AG: “Being my own boss and in control of my own destiny – having worked in a big blue chip company, I’ve seen first-hand how difficult implementing decisions in a bureaucratic environment can be. At Rowlinsons there’s the freedom to have an idea and make it work. That’s important to me.”

TP: “Andrew and I work well together – we are lucky to share similar views and the same outlook on running a law firm.”

What direction are you steering Rowlinsons in now?

TP: “We have plans to grow – since we joined the firm the turnover of the practice has quadrupled and that’s the course we want to continue on.  We’re diversifying as well – 90% of Rowlinsons’ work used to be conveyancing but we want to bring parity between all of our six main departments and ideally make them an equal split in terms of size. We’re achieving that – conveyancing has now reduced to about 65% of our work now and we have twenty-five staff in that department out of a total of fifty across the whole company. So we’re not reducing the size of our conveyancing department – we’re allowing for natural growth while actively expanding the others to achieve a more equal spread. The current market is so volatile with uncertainties like Brexit that we don’t want to be over-reliant on conveyancing.”

Are you noticing any negative effects as a result of Brexit yet?

TP: “In terms of instructions, no – not yet. On the day of the referendum we had approximately nine hundred active matters nationwide and the following day only one fell through. Perhaps it’s having more of an effect in London, where the market is slowing. But is that Brexit or just the region falling slightly more in line with the rest of the country? Right now we have people selling their houses because they think there’s going to be a property crash – so they’re selling and moving into rented accommodation with a view to buying again when properties may be cheaper. Conversely, we’re seeing people buying houses because they think mortgage rates and property prices may increase when we leave the EU. So in my mind, it’s a matter of wait and see really.”

What do you think makes Rowlinsons stand out from the crowd?

TP: “We don’t rest on our laurels – a lot of firms put profitability first but we are always investing in the company for the security of our staff and the benefit of our clients. Take 2013 as an example – we won a lot of awards and received praise from the industry but we didn’t sit back – instead, we looked at our IT infrastructure and invested a six-figure sum in a new, bespoke case management system, which we are perfecting all the time.”

What challenges do you think conveyancers are facing at the moment?

TP: “PII is a worry and also all the competition from large-scale conveyancing operations doing the work for cheaper legal fees. We proof ourselves against those threats – with our track record we’ve always managed to secure PII on favourable terms as we have the right risk management procedures in place. We also differentiate ourselves from these companies with the excellent customer service that our staff provide.”

What else is in the pipeline for the long term?

AG: “We’re recruiting – at the moment, we’re interviewing.  Actually, our policy is that we’re always looking for good people so if the right person comes along at any point we try to accommodate them. Obviously, potential employees need the right academic qualifications but equally important is finding people who fit in with the culture at Rowlinsons – with our existing team and our focus on a personal approach with clients.”

TP: “We have also considered opening in other towns where there’s a need for a solicitor’s presence – that’s under discussion at the moment. And we’ve just recruited a marketing expert to increase our social media presence – we were doing a lot of local print media but were a bit unfocused beyond that. So we’ve taken a specialist on board and are getting a really good response already.”

Are you entering the LFS Awards this year?

TP: “Awards are important to us – and we’ve won quite a few. The judging process is rigorous for the LFS and the Sunday Times Estate Agency of the Year Awards, for example, so they are a real accolade. This year we’re taking a bit of a breather but we are entering one of our staff members in the Young Conveyancer category at the LFS Awards – she’s worked hard and is a true success story. She came up from office junior to a receptionist and then to assistant to fee earner – now she’s become a Legal Executive with her own assistant and she’s only 25.”

AG: “Winning awards is great for staff morale – everyone at Rowlinsons works incredibly hard so an award acknowledging that is a pat on the back for all of their commitment and dedication.”