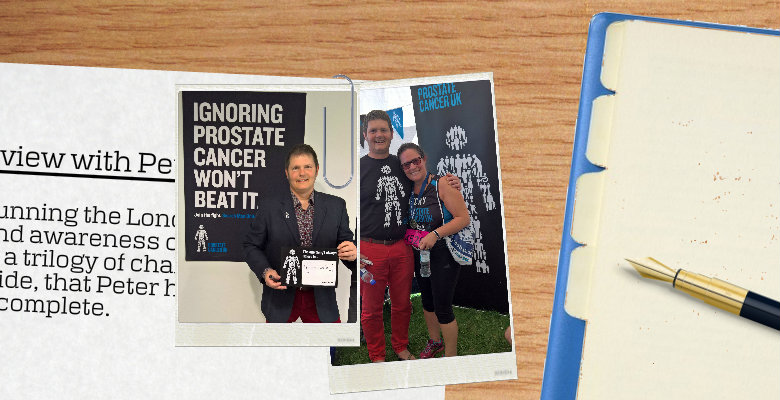 Peter Sowerby, Client Relationship Manager at Search Acumen, is running the London Marathon on Sunday (23rd April 2017) to raise funds
for Prostate Cancer UK and awareness of the disease, which he has been fighting for the past 16 months. The run is part of a trilogy of challenges, including an open water swim and a London to Paris 24 hour cycle ride, that Peter has set himself in 2017 and, as he told Jane Common, he’s more than determined to complete.

When were you diagnosed with prostate cancer, Peter?

“In the last quarter of 2015, I suffered with four months of debilitating back pain. I put it down to having moved stuff up into the loft or the fact I’d been carrying diving equipment but, despite all the painkillers I was taking, it was growing worse. One evening it was so excruciating I had to ring the out-of-hours doctors’ service as I was literally biting the duvet to try and cope. Long story short, I had some tests, one of which was a very simple blood test and on New Year’s Eve 2015 I was told I had prostate cancer, with a PSA level was about 5000 times higher than it should have been along with widespread metastases. From that, I remember sitting in the consulting room, bewildered and frightened, and thinking: ‘Where has all come from?’ I didn’t know the first thing about prostate cancer.

“That’s why I want to raise awareness. It’s seen as a disease that only strikes men in their 60s and 70s but it does affect younger men – I was only in my late 40s when I was diagnosed – and the problem is that the younger you are when the cancer hits, the more aggressive it is. After the age of 50, men can request a PSA test so that’s important for people to know. Also, there’s a genetic connection between breast and prostate cancer so if a man’s mother has had breast cancer, his chances of getting prostate cancer increase. A staggering 1 in 8 men will be affected by prostate cancer and the figure is even worse at 1 in 4 for black men.”

“Well, I have advanced or metastatic prostate cancer and sadly it is terminal. But I certainly don’t have an end date in mind. Doctors talked about two and a half years from the date of diagnosis but I plan to go on for a bit longer than that – I’ve got five years in my sights. I’m certainly feeling fit and well at the moment.”

Did it take quite a bit of coming to terms with?

“Oh boy yes, I was at that age where I was thinking about later life and retirement – I was approaching 50 and looking to 15 years of work and then, fingers crossed, 20 years of retirement in reasonable health. I was planning to spend a large part of that travelling – then, in an instant, all that was snatched away from me. If I want to do things I have to do them now – I can’t wait until next month or next year. In many ways I see that I have been blessed and simply been given a finite window rather than the almost infinite one we all anticipate!”

What made you put the trilogy together?

“Last year my younger sister Nicky, (the wife of a Hampshire lawyer) ran the Great North Run, swam the Serpentine and rode the London 100 km Night ride, raising money for three cancer charities, one of which was Prostate Cancer UK. I went up to Gateshead to be there for her as she completed the Great North and that got me thinking: if my little sister can do this, what can I do? Hence the marathon, the cycle ride and the swim to follow – they’re all a little bit more extreme than those completed by my little sis but I guess that’s the competitor in me. I know she’ll be planning something else to counter!”

How have you coped with treatment?

“I had six bouts of chemotherapy last year – at the first one I had a bad reaction and suddenly I was in the middle of one of those crash scenes from Holby City, which was very frightening. The medical teams modified my dose and after that I relatively sailed through – I was perhaps fortunate in how my body reacted. Within eight days of each session, my blood levels were back up to the point of doctors being happy to start my next session – typically that doesn’t happen until day 21. Now, for the time-being, my chemo is finished. I’m currently on my third drug regime and I’m having hormone injections every month. But I feel fine – fit enough or mad enough to run a marathon anyway!”

And you worked through chemo?

“Yes, obviously when I was in hospital actually having the chemo I’d put my out of office on but within a day I’d typically be back in the office, causing trouble! Work is an important part of my life – I enjoy my job and the opportunities it provides – and it gives me structure. Equally, I treasure my colleagues and our clients from whom I’ve received so much support – I’ve known Andy, Mark and Andrew for the best part of 15 years and worked with them since 2013. But, perhaps most importantly I just wanted to buckle down and get on with it. I can’t just give up on life – quite the reverse, in fact.”

People were very moved by the speech you gave at the LFS Awards last September – did you receive a lot of support from the industry as a whole?

“Yes, the support in this industry is fantastic – people have been incredible. At the LFS dinner, I stood on the stage and gave people my potted history – to increase awareness of prostate cancer in younger men and encourage colleagues to look out for the signs. The room was silent, which is quite a thing when 500 people have a few beers and glasses of wine inside them. After I spoke there was a round of applause and people came up to me for weeks afterwards, saying that my speech was inspirational and they were humbled by it. But I’m humbled by their support too.”

Have you ever run a marathon before?

“No. As a young man I played club rugby, divisional hockey and I’m still playing cricket. This year I’m looking forward to playing in the ECB over 50s Championship – in fact, even if I say so myself, I’m not too bad behind the sticks and there will be a few current professionals who will all confirm that Sowers is still more than half decent. But running a marathon – well, that’s a whole different thing!

“I’ve been training for 20 weeks – although I did have to miss a fortnight as I picked up a hideous blister – but it’s mind over matter and I know I’ll complete it. A couple of weeks ago I did 20 miles around Dorney Lake in four hours so there’s a possibility I could complete the marathon in five. That’s my goal but anywhere between five and five and a half hours and I’ll be happy. And it will be good to get the first of the three events in the trilogy under my belt.”

So when are the cycle ride and the swim happening?

“The 24 hour cycle ride from London to Paris is on the weekend of 17th and 18th June, leaving London circa 3pm and hopefully arriving in Paris 24 hours later. There are a few friends and colleagues in the peloton – my girlfriend Laura May, Andy Sommerville, Rob Pimenta, Micky Chilman, Kevin Tunnicliffe, Jackie Thoroughgood (STL), Colin Blears (Terrafirma) who is currently rowing across the Atlantic and two Bedfordian friends, Tim Chapman and James Everitt plus our all important support driver, a retired Bedfordshire retained firefighter colleague Peter Redman.

“The final element is the two and a half mile open water swim in the Atlantic, which I’m undertaking in August, out in Madeira. It’s funny – about a month ago, I realised that all of the components I’ve put together (if completed together) make up an Ironman and I’ve since started to ask myself whether the trilogy of events is at the easy end of hard or the hard end of easy. A friend laughed at that and said she thinks what I’m doing is the hard end of the hard. We’ll see.”

So, with two days to go until the marathon, how are you feeling?

“I’m really looking forward to it – the atmosphere, the anticipation, the crowds, the excitement and the achievement of crossing the line after those 26 miles and those all important 385 yards! But more importantly, I’m not the only one from our industry running the marathon in aid of Prostate Cancer UK – David Gilroy of Conscious Solutions is running as well. So please look out for David on Sunday too. My reward will be taking a day off on Monday to enjoy The St George’s Day Club Lunch at the Grosvenor House Hotel.”