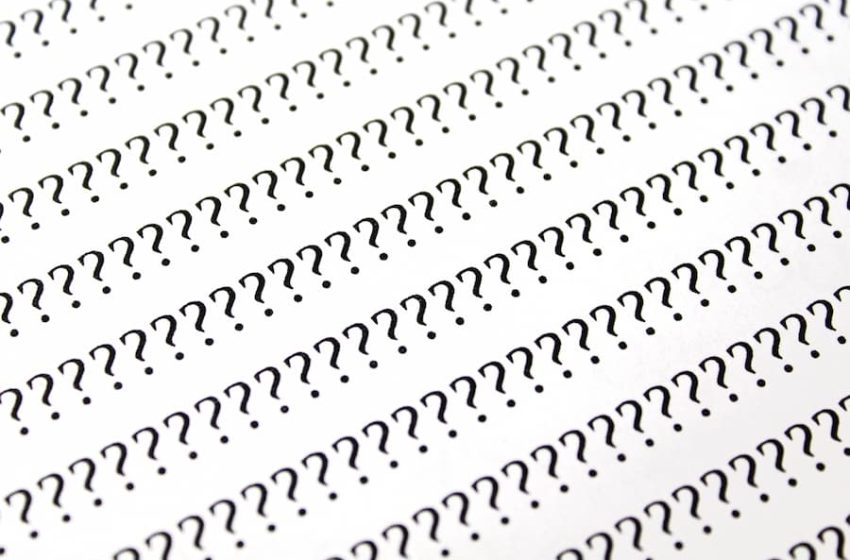 Complaints surrounding enquiries have been en vogue of late. LinkedIn has been awash with the rants of exasperated conveyancers having received a number of enquiries nearing three figures. Forums have been riddled with denunciation. Regular contributors to Today’s Conveyancer have joined the discourse. All this, it seems, is with good reason.

Over the past week, Today’s Conveyancer canvassed the opinion of conveyancers* through a poll in an effort to turn anecdotes and sentiment into hard numbers. The poll asked whether there had been an increase in the number of enquiries received of late, and whether said enquiries had fallen in relevance. The 233 respondents returned a conspicuous picture: 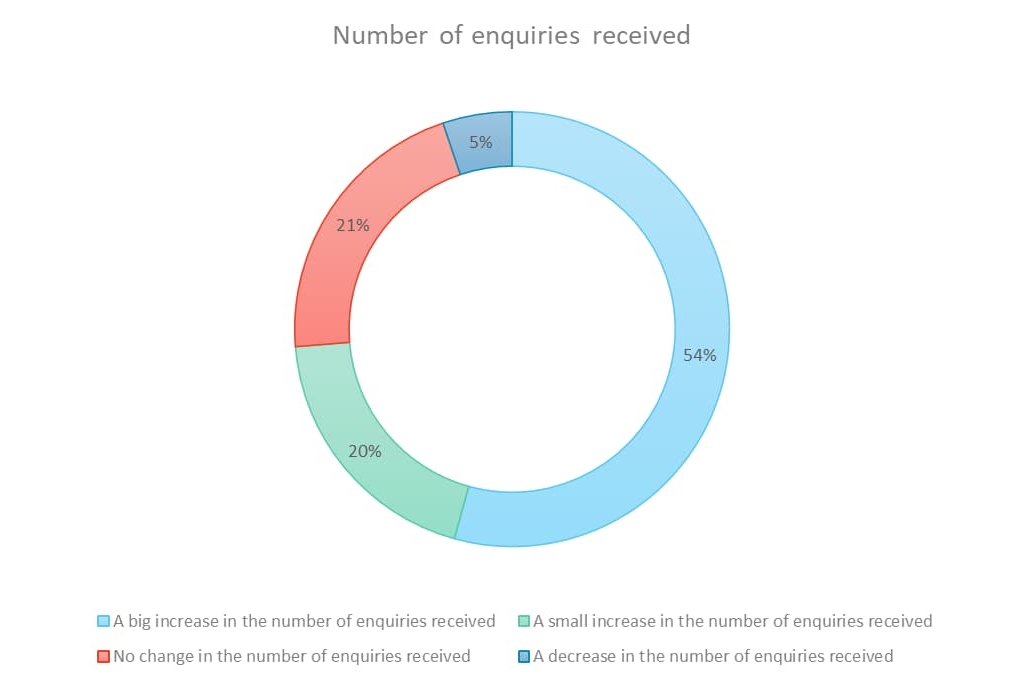 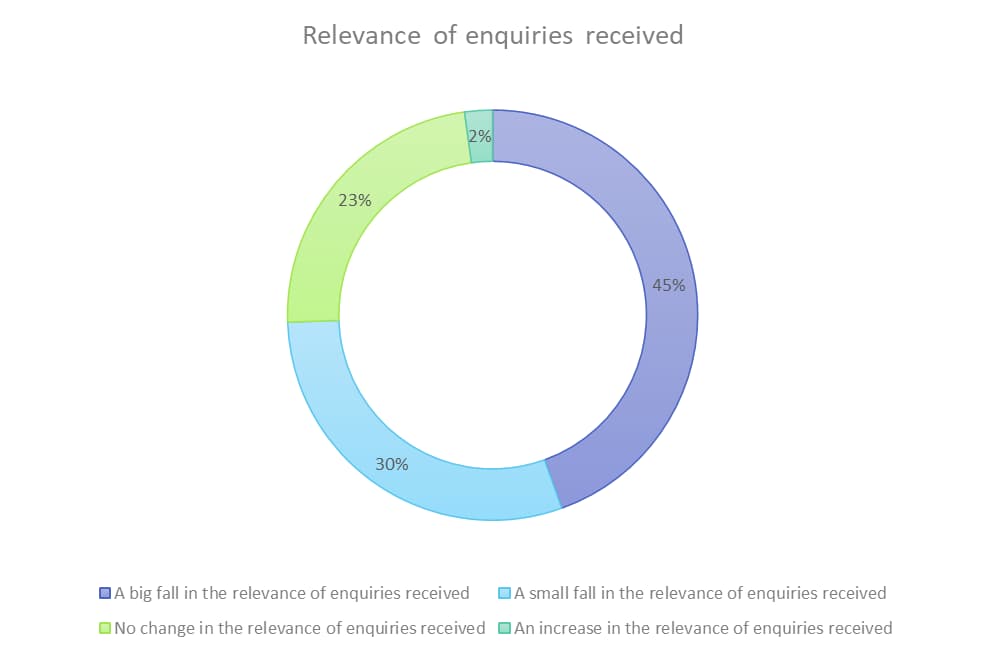 In responding to the poll, a selection of anonymous conveyancers gave their thoughts on the issue:

“Two main issues: 1. It’s often information the buyer’s conveyancer can obtain themselves with a little effort (EPCs/office copy documents/etc). 2. Enquiries tend to be raised as the next ‘milestone’ in the process without it being relevant or appropriate, just to please stakeholders and show ‘progress’.”

“Whilst the majority are property-specific, some firms have many general enquiries that they should answer themselves, order additional searches or bring to buyer attention for their inspection and survey to deal with. There are certain firms that repeatedly raise unnecessary enquiries.”

“Although I have answered ‘no difference’, this means that I continue to receive proforma and superfluous enquiries from qualified conveyancers/CQS accredited firms, who should be aware of the protocol.”

“We don’t have time to breath – let alone get any legal work done – due to the number of enquiries from first time buyers especially.”

“We need to switch back to ‘paid by the hour’… When conveyancers get better paid, we may be able to then invest in properly training staff and getting proper assistance with the admin. So if you think about it, a well-experienced family lawyer can charge almost £300 an hour. We probably spend more than 10 hours on a conveyancing transaction meaning a typical fee of £800 equates to about £80 or less per hour.”

It is clear that conveyancers feel enquiries are increasing in quantity and falling in relevance. Such a feeling is validated by evidence provided to Today’s Conveyancer by conveyancing firm The Partnership, who have recorded a breakdown of 12,471 transactions (7,284 purchases and 5,187 sales) completed from Q12018 to Q12022 inclusive.

On the findings of the data, Peter Ambrose, Managing Director of The Partnership, said:

“The number and quality of enquiries is a vital topic that is rarely discussed, because traditionally, it is very difficult to find the evidence to back up any findings often resulting in merely anecdotal assumptions. We have the advantage of capturing the data both from the enquiries we raise but also from other individual lawyers when we are selling, which does give us a purely objective view on the issue, down to a level of detail that is truly revealing. Everyone is in agreement that we need to address this training issue and we believe that our data can make a huge contribution in this area, and is why we are happy to share this.”

Following the findings of the poll, Today’s Conveyancer spoke with Beth Rudolf, Director of Delivery at the Conveyancing Association. Rudolf gave the following assessment of why additional enquires and post-valuation queries are rising:

“Enquiries arise because of conflicting or missing information. Information that conflicts with a valuer’s assumptions results in post-valuation queries. Just like conveyancers, valuers have been inundated with work and therefore less likely to have the resource available so make assumptions as provided for in the red book.”

On why the relevance of enquiries also seems to be falling, she said:

“I’m not totally sure; it could be because new staff replace those who have left who do not have the expertise yet and so raise enquiries that those with expertise would not raise.”

Asked what can be done to mitigate the issue, Rudolf said:

“The provision of upfront information would help a lot. For example, if all of the information is made available prior to sale agreed then mortgage advisers can avoid lenders whose lending policy will not suit the property and valuer software can pre-populate their templates to avoid assumptions. That means we can then avoid answering post-valuation queries with assumptions such as, ‘It is assumed that local authority consents have been obtained for the alterations’, or ‘It is assumed that there are 90 years left on the lease term’, because we’ll have identified the actual answer from authority data. It should mean there is no need for a PVQ to be raised on this which impacts the resources of conveyancers, lenders and valuers (for which no one is paid) and adds, on average, 21 days to the process, meaning a poorer customer experience.”

Rudolf went on to clarify the Conveyancing Association’s position:

“We support the provision of upfront information and the HBSG BASPI was written to include a valuer summary identified by RICS to ensure the information was collated to avoid PVQs. We understand the Property Logbook sub-group are working with the RPSA and RICS to identify other information that can support valuation, for example, the number of rooms, square footage etc, so we hope that this will deliver improvements in the process.”

A damning assessment of the situation was provided by Rob Hailstone, CEO of Bold Legal Group. Hailstone said:

“These may be be some of the reasons why this situation has arisen:

– Rising PII premiums, which often result in an (optimistic) scatter gun approach to raising enquires
– Lack of experience and training
– Poor working practices
– A lack of supervision
– Automated procedures
– Not enough policing and enforcing of the CQS-accredited firms that constantly breach the guidance on raising enquiries

Not only does this slow the whole process down, but it makes the profession look poor (to clients, agents and others) when two conveyancers waste time arguing over whether an enquiry should be raised or replied to.

“Presenting relevant property information in a timely manner is essential to reduce irrelevant enquiries that continue to plague the sector and create artificial barriers to improve productivity and customer experiences. Clear, accurate and timely data holds the key to streamlining the buying and selling process so the property market can operate as efficiently as possible.”

*Respondents to the Today’s Conveyancer poll