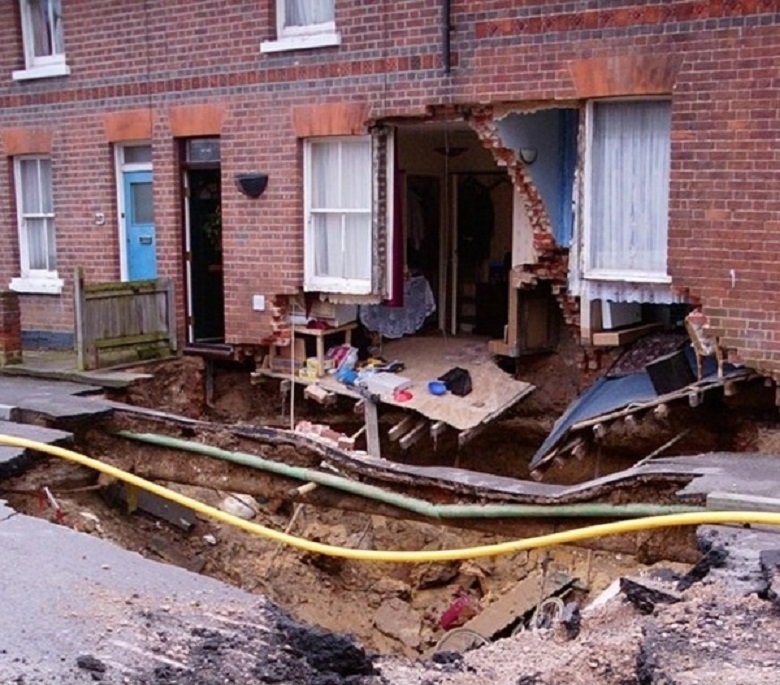 The last four years has seen a spate of ground collapses, widely termed ‘sinkholes’ in the media. Sinkholes are typically features that occur as a result of the natural subterranean dissolution of rocks prone to water erosion, such as limestone or chalk. These rocks are particularly susceptible to dissolving in acidic water, like accumulated rainfall. As hollows and fissures form in the bedrock, the overlying strata and soils can collapse. The presence of historical mine workings can accelerate this process and exaggerate its effect and this is particularly the case after prolonged rainfall or unusual ground saturation, such as burst water mains or flooding.

‘Sinkholes’ occurring across areas of the UK underlain by chalk, like Reading, Walters Ash, Hemel Hempstead, and most recently St Albans, have brought this largely unrecognised instability hazard into focus. Encompassing much of the country, from Kent, South England, East Anglia, the Home Counties, Thames Valley, and the entire outlier of Greater London itself, these chalk areas have never been typically associated with mining and fall entirely outside the core mining instability risk zones considered during property transactions. Whilst not of the scale, size, or extent of more well-known mining hazards, such as coal, limestone or tin, in Cornwall; underground flint and chalk extraction was once a significant and widely practiced activity, with well over 1700 individual mine locations in the south and east of England.

Mining in chalk has a history spanning back thousands of years and the extraction of flint for implements during Neolithic times in East Anglia and along the South Coast is the earliest known mining activity in the UK. Subsequent to this, below-ground working for chalk is recorded from pre-Romano times, with mines in Kent and Essex extracting resources for improving soils. This ‘chalking’ continued until the 18th Century, when agricultural mining became widespread to enhance crop productivity. From as early as the Norman Conquest, chalk has been mined to use as a binding agent to enable clay-working, added as a flux to brick, tile and pipe making, burnt as lime or even employed as building material. Initially small-scale, and servicing ‘local’ demands, this exploitation developed in scale and occurrence to become a prolific industry as the Industrial Revolution spurred building and infrastructure development throughout the 18th and 19th Centuries, the final mines only ceasing as late as the outbreak of World War Two.

Chalk mining methods have evolved throughout history as extraction techniques have improved, but they are also regionally variable, reflecting local conditions, available resources and demand. Mining styles have ranged from small, localised mines where chalk was extracted immediately around an entry shaft, to complex workings, stretching tens of metres below ground and consisting of numerous galleries. Similarly, the occurrence of these workings is widespread with often multiple mining sites occurring within immediate proximity of virtually every significant site of settlement, town and city underlain by chalk. For example, a high density of chalk workings often each comprising sizeable mines, are to be found in Reading, Norwich, Bury St Edmunds, Gillingham, Hemel Hempstead and across the southeast of Greater London. Coupled with the agricultural mines scattered across the historical countryside, the mining of this commodity has left a considerable legacy of potential ground instability to the modern Built Environment in some of the most populated areas of the country.

The collapse of chalk mine workings and overlying ground has resulted in significant material damage to individual properties, businesses and infrastructure, as well as disruption and on-going issues of property blight. Chalk mine failures have also been responsible for fatalities and the prolonged displacement of homeowners in recent times. For example, collapses in Reading in the early 2000s resulted in over ten years of investigative and remedial works, with home owners evacuated for periods spanning over two years.

Identifying the risk posed by such chalk mining is problematic. Workings were ad hoc and, unlike our more extensive coal and metal mines of the late 19th Century, it was not necessary to survey underground levels for miners to predict the course of an orebody or to produce plans to comply with legislation. Chalk mine workings were shallow and entirely above the water-table and so were not accompanied by tell-tale pumping houses, winding gear or other mine. Lacking such surface remains, and in most cases the adits and shafts long-sealed, the land itself built-over, there is little or no indication at first-glance to forewarn of any migrating voids below. Given the absence of detailed documents or present-day evidence, the identification of chalk mining activity requires bespoke research, as well as specialist understanding and interpretation of the limited historical indicators available. As attested to over the recent years, and perhaps with increasing relevance as our climate changes, this knowledge is becoming a necessity for the housing market in chalk areas where there is potential for the mining ground instability risks to have gone unassessed and for further subsidence events, like St Albans, to take place.

At Terrafirma MS Ltd we are fortunate to have a resident chalk mining expert in Dr James Ford. James has a PhD in historical chalk mining geo-hazards in the UK and has researched, delivered papers and presented extensively on the subject. James also has broad, practical experience of investigating and surveying abandoned chalk mines and witnessing ground stabilisation schemes.

In addition to over 30 other minerals extracted across the UK, Terrafirma MS Ltd has utilised in-house expertise and a unique archive to digitise a ‘Mining Risk Zone’ for chalk. This zone encompasses the area of the UK within which flint and chalk was known to have been mined, as well as areas that were amenable to different forms of historic extraction. It is now possible to enter a property postcode online using our TerraSearch© platform, to determine whether or not it lies within an area that may contain former chalk extraction hazards. The result is a ‘Certificate of Mining Risk’, which can be instantly downloaded and is a concise and cost-effective way to screen a locality for the presence of potential mining related ground instability risks. A Certificate of ‘No’ risk can be purchased for £10 + VAT and provides a record that your conveyance due diligence has included mining related stability risks. If potential for chalk extraction is highlighted, the Certificate will be free of charge and recommendations for further assessment will be provided. Access to TerraSearch is available upon request – contact one of our geologists to find out more.