Quick Move Now has reported that the rate of house sales falling through in April was 30.32%, with one in three sales failing to reach completion.  The main reason for this high rate was issues obtaining finance.  This reflects the behaviour of the market over the first four months of 2012.
Donna Houguez, Market Analyst for Quick Move Now commented:

“The fall through figures remained at approximately 30% for the whole of the first quarter of 2012 and this pattern continued into April.  We analysed the trend for January to April over the last six years and found that the 2012 rate has been the most consistent. 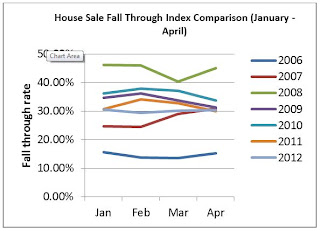 “The fall through rate for January to April in the years 2006-2011 proved changeable whereas, this year, fall through levels have barely altered thus far.  It will be interesting to see whether fall through levels deviate from 30% over the coming months or whether this is a longer term stagnation.”
Today’s Conveyancer, bringing you the latest conveyancing news and updates.