The annual value of London’s commercial sales of property has soared by 166% since 2014, up from £11.3 billion in 2014 to £30.1 billion in 2017, according to new analysis of HM Land Registry data for Greater London’s 28 boroughs by Search Acumen, the property data and technology provider.

With £12.7bn worth of commercial sales already achieved in 2018, this year is set to be another year of strong performance in the commercial market.

Search Acumen’s analysis shows the number of transactions is also increasing. Since 2014, annual commercial transactions in London have increased by 114% from 7,445 to 15,939 in 2017 as Brexit uncertainty fails to dampen investment appetite in the capital’s property market.

Commercial transactions also account for an increasing share of London’s property market activity as a whole. In 2017 and 2018 to date, almost one in four (23%) London property transactions were commercial in nature compared to private residential transactions, a big jump from just 9.5% back in 2014.

Based on the most up to date information from HMLR at the time of writing, which includes complete data for January-May 2018, and partial data for June-July 2018. 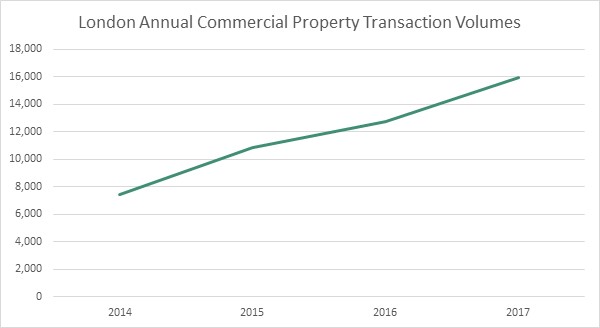 With an annual valuation of £3.3 billion in 2017 alone, the City of London was home to 11% of the total value of all commercial transactions in London (£30.1bn) and also accounted three of the city’s ten largest property transactions last year.

Search Acumen’s analysis comes as the City of London becomes the first London borough to digitise its Local Land Charges (LLC) register, expediting and improving the process of buying and selling property across the City. The newly digitised service from HM Land Registry will provide solicitors across England and Wales with online access to data needed to carry out necessary due diligence.

Until now, the average LLC search has taken 10 days to complete; a digitised register in 2017 could have therefore saved property lawyers and investors approximately 1,460 days – or four cumulative years – of waiting time across the City’s 146 transactions.

As HM Land Registry rolls out the service , England and Wales will soon benefit from a more streamlined legal process when it comes to buying and selling both residential and commercial property.

“London’s commercial market is booming at £30.3bn in 2017, with transaction numbers more than doubling in just four years. Despite ongoing uncertainty, the signs suggest 2018 is set to be another bumper year, as Brexit fails to dissuade investors across the globe from buying property in our capital.

“Three of London’s top ten largest property transactions last year happened in the City, evidence that it is the home to the UK’s biggest and most complex property deals. The LLC digital switchover will, therefore, be welcome news to lawyers and investors across the City of London, as HM Land Registry’s digitised LLC service is set to simplify and speed up the transaction process, making the City an even more attractive prospect for investors.

“Search Acumen has long championed the practical benefits of opening up property data, and we look forward to working alongside HM Land Registry to make the City of London’s switch-on a success.”

“Search turnaround times have always been a sore point for real estate lawyers.  Historically, the delays incurred awaiting local searches have been a real administrative burden costing the sector time and money.

“Being able to get an accurate view of the issues early on in our due diligence process is critical.  An unfavourable search result can lead to big delays on a transaction, particularly where third parties are then involved.  Indeed, in some cases it may ultimately lead to a decision by our client to abort the transaction – clearly the earlier they can make an informed decision on the project as a whole, the better.” 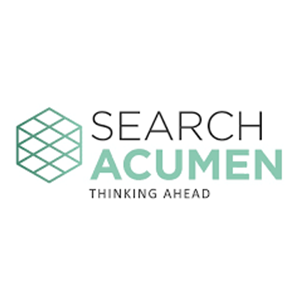