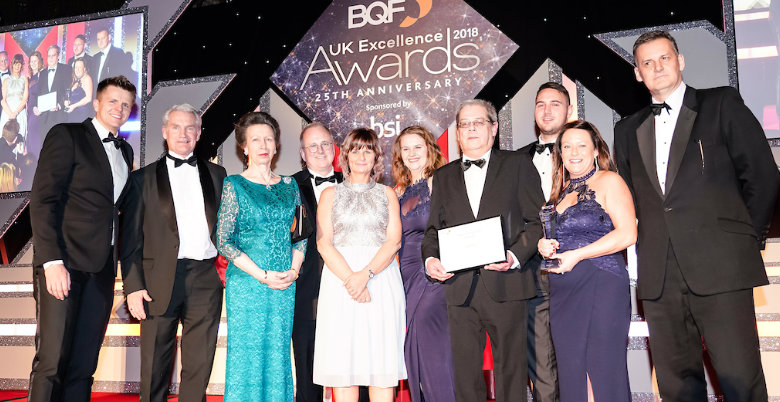 It is with immense pride and excitement we share with you that SafeMove won the UK Excellence Award on Thursday 15th March 2018, which is one of the highest accolades an organisation can achieve in the UK. The ceremony was hosted by Jake Humphrey, BT Sports anchor and took place at the historic Guildhall in London for the British Quality Foundation’s (BQF) 25th Anniversary. They were also delighted to be in the company of the BQF patron, Her Royal Highness, The Princess Royal, as guest of honour and who presented them with their award!

SafeMove started out their journey working towards Excellence with the European Foundation for Quality Management model (EFQM) approximately 8 years ago. The excellence model is used by organisations to drive continuous improvement, evaluating strengths and areas they’d like to improve alongside displaying tangible results.

SafeMove won the North of England Awards back in 2014 after a number of years of identifying and working on their improvement plans and were finalists again in 2015. SafeMove aspired to become further recognised and their efforts took them to the UK Excellence Awards as finalists in 2016. During their journey, SafeMove have been Recognised for Excellence through BQF as a 5 star organisation on two occasions, displaying continuous maturity as an organisation when assessed against the EFQM model.

The whole team have worked very hard for many years and becoming UK Excellence winners is testament to this – a huge achievement for a very well deserving team and long may this continue into their next aspiration to become European Excellence winners!

“I am incredibly proud of each and every SafeMove team member that has played their part in achieving this incredible accolade. The continued focus on continuous improvement is at the heart of everything we do and has certainly been recognised during our last assessment. We are lucky enough to work with great people, customers and partners who should all feel a sense of pride for what has been achieved.

“One of the biggest improvements for me personally, is that to achieve UK excellence you must display excellence across all 9 criterion parts of the excellence model which is something we have worked hard to achieve over the last few years.  We will not rest of on laurels though! We are already working on our improvement plan following our assessment on November which will help us on our way to achieving our next aspiration of winning the European Excellence Awards!”